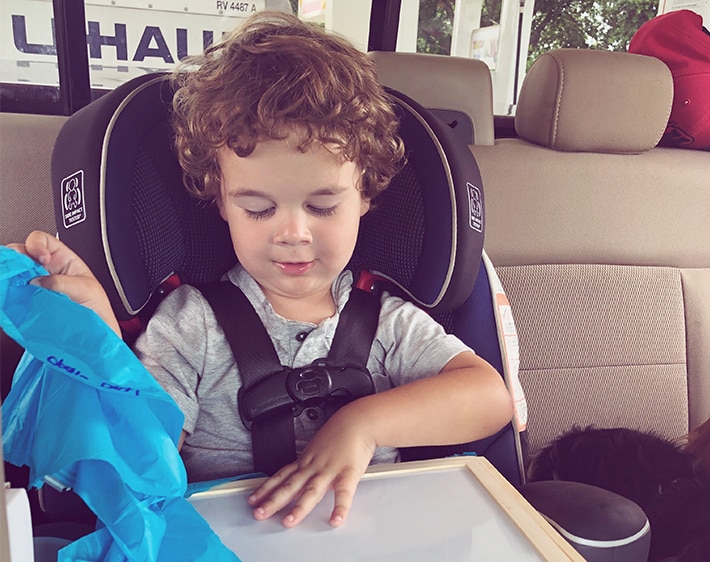 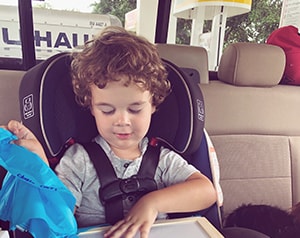 Hi friends! This winter we lived in Florida for 6 months. It was so fun to have a change of pace with no snow and lots of beach days! I also loved decorating our house—I really went all out and took some risks because I knew it was temporary. The tricky part was that we made two road trips across the country in 6 months!

Since I have a three year old son and two dogs, we had to pace the driving and it took 40 hours over 7 days. Since we’re pros at this by now, I’ve figured out some road trip hacks to make the long hours in the car bearable. If a road trip is in your future, I hope these will help you!

As a back story, we moved to Florida right after Christmas when we had just sold our home (aka, it was a stressful time in our lives). On the way down, I didn’t do much to prepare. I had some DVD’s, a coloring book, and some downloaded shows on my phone and that was about it. Well, it wasn’t enough. My son got bored and we got in the bad habit of buying a new treat and a small toy (if we could find one) as gas stations on the way.

That got expensive fast! And the toys were cheap and broke quickly. For the drive back, I was determined to have a smoother trip. Here’s what worked for me.

I read a ton of articles and asked my followers on Instagram for tips on car trip activities. Truly, I received tons of awesome tips (thank you)! As I heard what others had done, I could immediately guess what my son would like and what he wouldn’t. Knowing what your child loves to do and play with and then customizing these suggestions to fit that will make the road trip much smoother!

A GIFT A DAY

When I was young, my family and my aunt’s family went on a road trip to South Dakota. I remember that trip being SO fun (despite the long drive)! We sang songs, I got to be with my older (and cooler) cousins, and our moms had a gift for us every day. I remember one day was a ziplock bag full of gummy worms- it was such a treat!

I decided to do a similar idea for my son- he loves birthdays (who doesn’t)?! So I picked out some of his favorite toys and treats and set a $7-$10 a day budget. Below is what I bought him and I’ll let you know his favorites and what didn’t work so well.

For the first day, I gave him a wooden magnetic box with a lid. On one side of the lid is a chalkboard and the other is a magnetic dry erase board. I also gave him some ABC magnets so he could work on his letters. He LOVED playing with this box! And it was great because as the week went on, it held his toys so they wouldn’t get lost as he played in his car seat.

Don had fun drawing on it with the included dry erase marker and the set came with some fun magnets. Aka, this was a great option that I recommend.

Everyday I also gave him some candy and a sheet of stickers. I made sure to also pack healthy snacks so his box of candy was his big treat.

My son is such a fan of stickers! I think they can get expensive fast, so I was super excited when I found a huge pack for $6 on Amazon. These were one of the highlights of the trip! I have an inexpensive blank book ($1.50 for 3 on Amazon) that he sticks them in (or he put them all over his body, lol). If your child is into stickers at all, I highly recommend them! Below is a picture of all that came in the pack (and we didn’t use them all):

I actually spread these gifts out because they were pretty much the same- a Lego set, stickers, treat, and a book for one day. My son is a HUGE Lego fan! One day Target had their mini sets on sale for $5 each so I grabbed three (there’s a bunch available on Amazon for $5 too)! Don loved playing with these. I’d build the tricky parts and then he’d play with them in his box. The last three sets worked better for imaginative play. I made sure to pack zip lock bags so that we lost as few pieces as possible.

The beauty with the Legos is that he’d play with them when we got to the hotel at night too. There’s lots of Lego sets for girls too, so I think this is a fun option! I’d do more of them next time.

The book was also fun to have in the car. I read it to him and he was really into it and looked through the pictures for awhile after. I’d definitely do more books in the future!

I’m going to, sadly, call this day the dud day. I got a bunch of dinosaur things for my son from the Dollar spot at Target. He kind of liked the finger puppets, but hated the rest. Just as a note, next time, I’d give him the “lamer” gifts first. What happened is that as the trip went on and the novelty wore off, he got less excited by the gifts. I think this gift would have done better if I gave it to him earlier on.

For the last day, I gave Don a pet store sticker book. I’d call it a slam dunk day because he played with that thing for HOURS! And I’ll be real with you, I played with it too- lol (Don had pulled off all of the stickers and someone had to put them back). There’s a few choices on these sticker books and I adore them! I 100% recommend these!

I spent 5 minutes and wrapped everything with tissue paper. Luckily, I had some on hand and it really made it more fun and added an element of surprise! I wrote the day on everything so that I could space out the Lego days.

Usually Don opened the gifts in the car (I gave them to him in the afternoon after he napped and was the most cranky). On this day, I let him open his gift in a park so we could put the Lego set together at lunch. Plus, it made for pretty pictures (I loved our stop in Savannah, Georgia)!

I downloaded a few apps on my phone so my son could play games (which I think is a tiny bit better than watching shows). He loves the Sago Mini games! They are perfect for a 3 year old and he can figure them out on his own. They have a few free options, so check those out first!

My son is a transportation lover! So I made him a printable road trip scavenger hunt so that he could spot signs and vehicles as we drove. I like the idea of him observing his surroundings instead of having screen time. This was a hit! I thought that I would include it as a free download if anyone else is going on a road trip too!

Jul 30, 2018
You dont have to rely on tablets and videos to keep kids occupied on your next road trip. Just ask this mom of two young daughters. 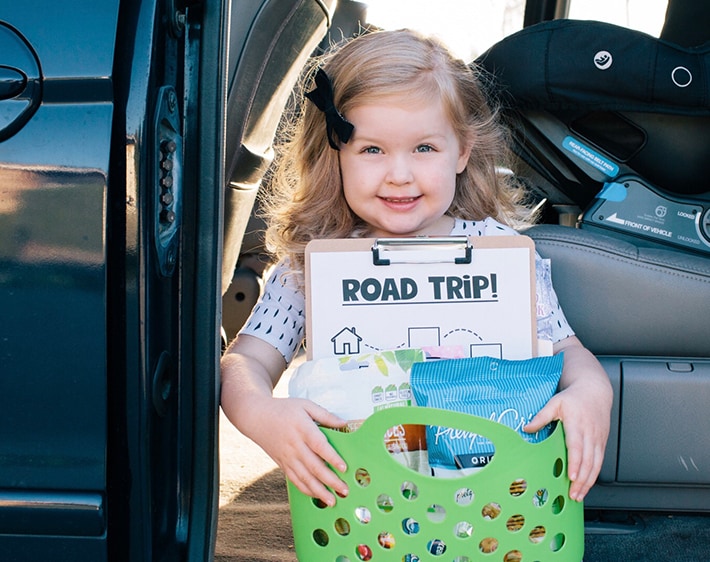 Jul 29, 2018
The car is packed and youre ready to go now how do you keep the kids happy and content? This road trip veteran shares her tricks and tips. 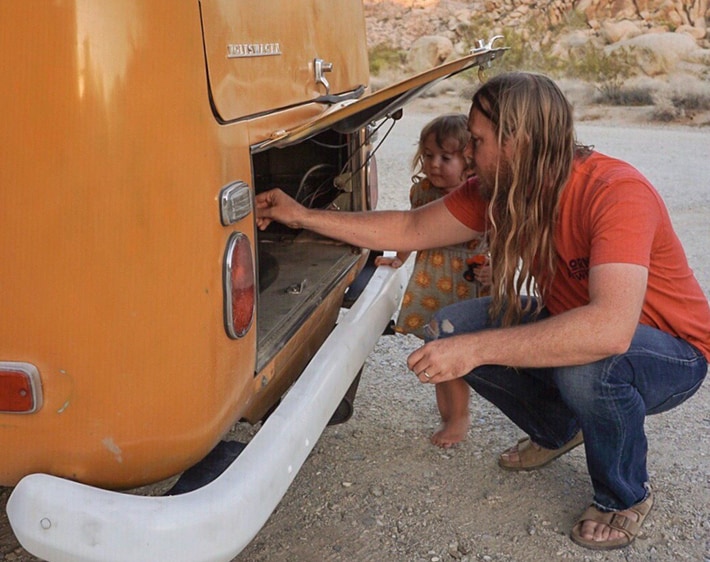 Jul 28, 2018
Safety comes first on any road trip especially when youre driving a 71 camper bus. Watch this family get ready for the wide-open road.